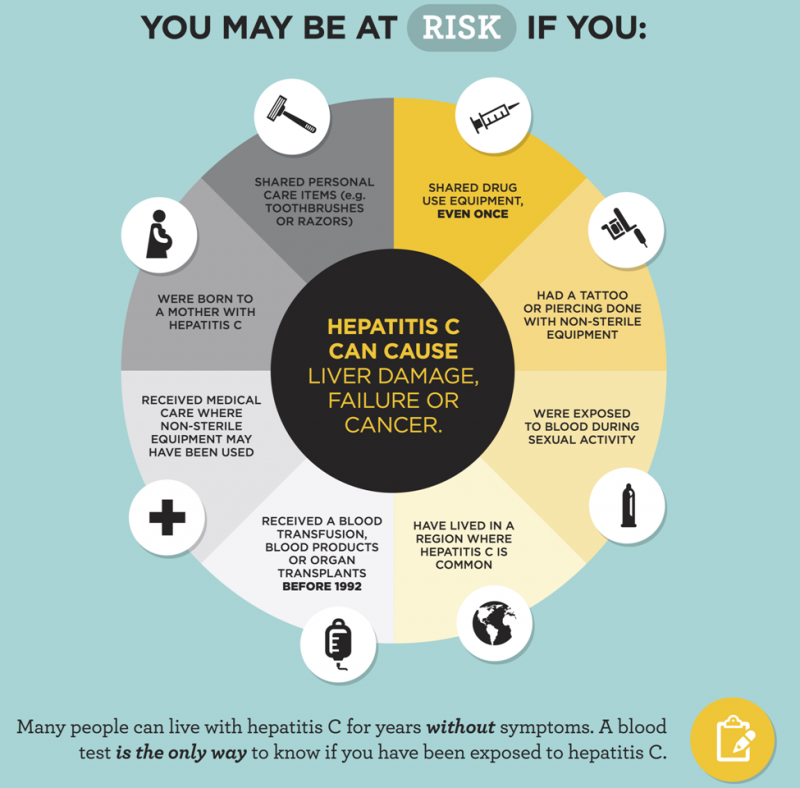 Hepatitis is the inflammation of the liver caused by hepatitis C virus infection. The major symptom is jaundice. As a result of inflammation, the bile passage produced by the liver is blocked by breaking down the fat and liver function is impaired. When a person gets hepatitis, the liver becomes inflamed and stops functioning properly.

The number of new cases has decreased in recent years. Thus, for example in 2000 the incidence was 2.7 percent. The reasons for this decrease are the controls established to detect contagious diseases in the blood donation processes. Before the 1990s, it was not checked whether a donor’s blood was infected by the hepatitis C virus, so that many current patients contracted the pathology after a transfusion.

The viruses responsible for hepatitis are germs that make the disease, in its three most common types, A, B and C, spread from one person to another; are called, respectively, virus hepatitis A virus hepatitis B and hepatitis C.

The difficulty of this pathology is that in most cases it is asymptomatic and the diagnosis is made when the disease is already established and chronic.

Hepatitis C sufferers may suffer a mild pathology for a long time and not be aware that they have hepatitis C, or discover it after having some tests that give a positive result. However, there is also the possibility that they may find out why the disease has progressed rapidly; then the diagnosis is made in a stage of liver cirrhosis or liver cancer.

This disease, which for years is the leading cause of liver fibrosis in adults, especially in the West, as well as primary liver cancer, can be spread to anyone, as it is transmitted through the blood. At the moment in which there is a contact of the blood of a healthy person with infected blood, contagion and infection occur.

The symptoms of the disease are common to those that cause hepatitis A and B viruses. The person who gets any of the forms of hepatitis, A, B or C experiences manifestations similar to those of a flu . There are symptoms that appear in most cases and others that only some patients present. Some patients may even suffer asymptomatic hepatitis C. In any case, if some of the following disorders occur, it is advisable to see a doctor. If he suspects that it could be hepatitis, he will surely do a serological test.

Symptoms that only some people have:

The only method that currently exists to prevent the spread of hepatitis C virus is to  avoid being in contact with the blood of people with the pathology .

The patient must monitor everything that involves a possible infection. You should use disposable syringes, use properly sterilized surgical materials and pay attention to things such as a piercing or a tattoo since; although they involve a possibility of minimal contamination, if the instruments are not sterilized properly they can cause the spread of the virus.

Specialists point out those personal hygiene measures, which refer to the possibility of coming into contact with the blood of infected people and the fact of maintaining safe sexual relations, are the issues that patients have to take into account. Among the recommendations are:

Chronic hepatitis is divided into four phases depending on the involvement of the liver.

This pathology has different genotypes of the virus and not all people are infected by the same genotype. There are genetic differences between one genotype of the C virus and another. To date, six different ones have been described and in Spain the most common are genotypes 1, 2, 3 and 4 .

To check if someone has hepatitis or not, the doctor can perform two types of tests:

Blood or blood tests (blood is drawn with a syringe).

Using a biopsy, a simple test that involves removing a small piece of liver to analyze the tissues under a microscope and check whether or not they are damaged. The most constant changes are the increase in blood bilirubin and the increase in the activity of transaminases (liver enzymes, known by their initials ALT or GPT and AST or GOT). They are between 20 and 40 times higher than normal values. These tests not only indicated if you have hepatitis, but also determine the type like A, B or C and the severity of the disease.

The diagnosis can be confirmed by the demonstration of antibodies against the hepatitis virus in the patients’ serum.

Currently, hepatitis C has no vaccine. However, treatments can completely cure patients with this pathology. According to Ricardo Solá, head of the Hepatology section of the Hospital del Mar in Barcelona, ​​“it is a disease that could be cured from the beginning. However, it cured very little. ”

The specialist indicates that, at first, only interferon (treatment also used in hepatitis B) or interferon and ribavirin could be given to patients. These drugs were used between 90 and 95 and managed to cure less than 10 percent of people.

In the year 2000, the first advance in the treatment occurred when discovering a way to apply interferon, pegylated interferon. With this formula the efficacy of the treatment rose to about 50 percent and later, when the first interferon-associated drugs were introduced, it rose to 60 percent.

However, the great advance has come in the last two years , especially in the last one, with the development of the new treatments. “They have begun to use interferon-free drugs  (it is no longer necessary to administer it), medicines that no longer cause side effects and that in a very short time cure practically one hundred percent of people . The problem is that these drugs are very expensive, ”adds Solá, who adds that the price of these therapies is between 25,000 and 100,000 euros. The expert indicates that there are many families of these drugs, leading to a really important offer today.

“At the time when these medications are administered to a patient with hepatitis C, the chances of cure are enormous, even in cyanotics . If it is applied in the most initial stages, the cure is absolute and the person forgets the virus and also the liver disease, ”he says. “In patients who have cirrhosis, eliminating the virus improves evolution but cirrhosis continues to exist in many cases, therefore they must be monitored and always look for the possibility that the disease does not progress or develop cancer.”

For treatment of Hepatitis C, many doctors prescribe Epclusa. In case your doctor has prescribed you with that, you can either get it from pharmacy or buy epclusa online.