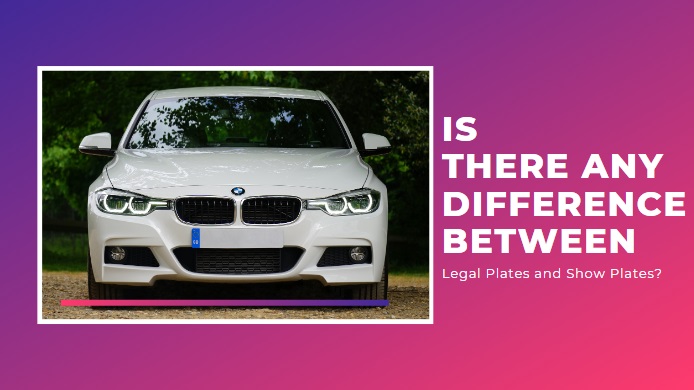 If a vehicle runs on a road then the vehicle must have a license plate that is used to identify the car owner’s information. Without license plates, it’s illegal to drive on the roads of the UK. These license plates are of mainly two types of show plate and legal plates. The first one is primarily used for show and doesn’t abide by the law while the second one that is the legal plate is following the laws and is legal to be put on a vehicle ran on UK lanes.

From the name, it’s quite intuitive that these number plates must be used for show and that’s the case. Car seller shops, auto shows use them just to add more colors to their creation and moreover as it’s not on the streets so it’s completely legal to see them in auto shows, sports competitions.

These show number plates may contain any type of fonts or any artistic style these are just made to add a feather to the car or bike. But these show plates are not just limited to vehicles large firms and businessmen use them as a signboard in their firms to show their status or promote the brand.

These plates can be made of a variety of materials ranging from high carbon fiber to reflective plates. Moreover, the fonts can be of any style from super artistic to writing the numbers in such a manner that they resemble a unique word or any art form or any specific message. The plates may have a graphic design. Even if the show plates are made with high-quality materials the same as the legal plates even then the Laws don’t allow them. Lastly, they can only be used to show how the plate would look at a specific model or only for show purposes.

Almost all the show plates are not readable by traffic cameras due to their reflective surfaces or due to fonts used because of which it affects the spacing between the numbers and those numbers which signify a specific message or sign are hard to read. So it becomes quite difficult to identify the car from the database.

Legal plates are just number plates that abide by the rules set for the number of plates to be used on the British roads. The British laws have strict rules regulating the fonts, spacing, material of the board to be used.

The manufacturer name must be mentioned at the bottom right-hand corner and the border must be retro-reflective. No image other than a national identifier can be included on a road-legal number plate.

Every vehicle must abide by the rules given by the UK laws for the license board for vehicles. Moreover, it should be ensured that the plate has been manufactured by a reputed and trustworthy manufacturer or a company. Experienced manufacturers will already know about the laws and plates produced would comply with the needs.

If someone has a motorcycle then the rules are a bit different from that of the cars, For instance, motorbikes are not obliged to display their number plates in the front, other differences are in the sizes and character spacing. As the cars and motorbikes are of different sizes so they should comply with different rules for number plates.

The motorbikes must meet the following phrases:

Using show plates on the road puts you at risk of a £1,000 fine. They will also cause you to fail your MOT, so always make sure you use road legal plates, even if you are driving directly to a car show where you’ll put your show plates back on again.