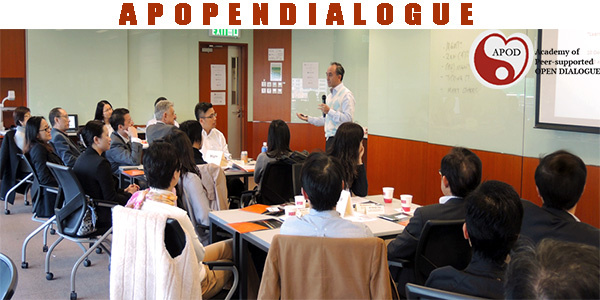 I have been attending the International ISPS Conference here in Rotterdam and what a truly amazing gathering it has been. The ISPS Conference always brings together an eclectic mix of individuals keen to promote a more progressive, family oriented outlook with regards to mental health and the treatment of psychosis. The focus is on the family and how outcomes are improved if they are involved in the treatment. A number of colleagues discussed family therapy opportunities in their various countries. The models of family work used in Italy which are based on family therapy approaches that originated in Argentina in the 1960’s were much discussed. There are similarities with the Open Dialogue model where the service user decides who he wants to attend the group but the group also contains other families which differs from Open Dialogue. The thinking behind the Argentinian model is that three generations of a family contribute to what we would describe as psychosis and that it is inter generational trauma that takes this period to work through. Groups based on the Argentinian thinking have also been formed in Belgium and the presenters described their difficulties in setting up the groups but more importantly the difficulties they had writing about it almost akin to giving birth.

Another aspect of the ISPS Conference that I relish are the wide varieties of presentations and the more creative use of therapeutic interventions. I attended an excellent symposium on the use of creative writing in groups in Athens and the Netherlands and the different approach to the material. In the Netherlands the content of the text is unimportant but the way the text is formulated is paramount. In Athens the content was more crucial and discussed in the psychoanalytic context. The third presentation from the U.K. was more personal and the psychologist had lived experience and used this in her poetry for discussion and to encourage other young people in the Afro Caribbean Community to express their feelings through the written word. There were also other creative therapies such as psychodrama and dance that could be used in conjunction with Open Dialogue approaches. There were also work shops on EMDR and CBT and how these interventions could be woven into treatment for psychosis and utilised in conjunction with Open Dialogue.

Many of the presentations have been based around the Open Dialogue model, with service users, families and professionals discussing the implications for treatment as usual, what ever that is. Although I was surprised that there were people in attendance for whom Open Dialogue was a new concept. It is generally accepted in most Open Dialogue settings that Peer Support workers form part of the team, are trained at the same level and make a valuable contribution to the work. The Peer Support Model was a U.K. concept initially and discussed at length at the original NHS NELFT training in Birmingham, where peer support workers were first introduced to the training. The original emphasis on peer support was because lived experience is valued and recognised in the UK system. Now Peer Support workers are trained and involved in work with the original Finnish teams enhancing and refreshing the original model.

Author Bio: Jane Hetherington, Principal Psychotherapist at KMPT and an employee at Early Intervention Services in Kent, has completed Open Dialogue course and will be a part of the new Open Dialogue service. She is trained as an integrative psychotherapist and has experience working in primary care, substance misuse, and psychosis services. Here, she writes about a few psychotherapeutic theories.