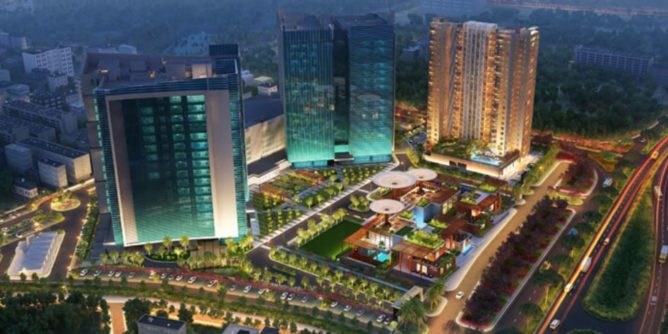 When one thinks of a business district in Kolkata, the place that immediately comes to  mind is Dalhousie Square. The people of the city love to hang on to nostalgia and cherish its history. The number of heritage buildings that abound in this area remind us of the bygone Colonial era of the British Raj. The area is one of the busiest of the city, bustling with activity and people. The downside to this is that offices in buildings in this area are congested and often lack basic facilities like parking, clean washrooms and so on. Thanks to the IT boom, Kolkata shifted its focus to a new CBD in Salt Lake Sector V and later to New Town. The latter is located in Rajarhat, a planned township on the eastern outskirts of Kolkata which has been witnessing a rapid development in both the commercial and residential sectors.

New Town is going to be the first-ever financial services hub in the country with 100 acres of land in the Commercial Business District Zone. Progress, sadly, means that we will have to put aside nostalgia and make that shift  towards establishing or moving businesses to a neighbourhood that will to provide modern benefits and ensure employees’ well-being.

Modern office spaces in New Town are well-equipped with modern amenities like reserved parking areas, security kiosks, food courts, gaming zones, meeting lounges, clubs, and more. New Town is the first-ever business district in India that has space dedicated solely to financial and legal services, in the form of the New Town Arbitration and Financial Hub. Most importantly, the area has enough scope for further development.

Sprawled over 40 hectares, the township is at least three times bigger than its neighbouring planned city, Salt Lake. The process of residential and industrial development with basic civic infrastructure has been rapid.

The Government has taken initiatives to make New Town a smart city. India’s first Wi-Fi road connectivity has been established in New Town with free Wi-Fi available over a 5km stretch connecting the Main Arterial Road to the Airport and Sector V.

The satellite city has been recognized as a ‘Green City’ by the IGBC (Indian Gold Building Council). Cultivable plots and other infrastructure have been developed in a planned manner. Waste management vehicles and electric buses have been launched to promote a pollution free living.

In New Town, unlike other townships, residential and commercial zones co-exist. A cycle-hiring system of public transport is in place that residents can avail of to travel short distances.

New Town is connected to the rest of the city through air conditioned / non-AC government and private buses, taxis, auto rickshaws and so on. The International Airport is also very close to the township, facilitating connectivity via air to the rest of the world.

The roads are wide and well-maintained, allowing free and fast movement of vehicles, unlike the crowded and congested streets of central Kolkata, especially the Dalhousie area.

Healthcare facilities, malls and other entertainment options, and luxury business hotels are making New Town a favorable option as the top commercial hub of the City of Joy.

If you are looking for commercial property for sale in Kolkata, New Town has everything to offer. Its strategic location, great transport  system, clean and green surroundings, entertainment options, with urban facilities and amenities are making it one of the most happening work destinations of Kolkata.